I’m transgender, and I suck at sport.

Some of my earliest memories involve me looking up at towering adults while wearing an adorable tutu and feeling very, very cross about it.

Even though I sucked, I did a lot of sport as a child – ballet, tap dancing, horse riding, judo, swimming, gymnastics, football, etc, etc. I was a fat kid with social anxiety and extremely poor depth perception and all of that mattered a lot, but when I think back on my super active days what hits me is the remembered feeling that I was somehow doing sports wrong because I wasn’t what people wanted me to be. My fatness was openly criticised, of course, and this might be something I write about fully later, but the silent open secret was that I was gender non-conforming. I looked queer before I even knew what that was, well before I’d worked out that other girls were lovely and also I wasn’t one. When I danced or did a handspring I wasn’t enough of a girl; when I tackled people or threw them to the ground I wasn’t enough of a boy. In competitions I was made to perform at the back of groups so I wouldn’t be seen, or benched and asked to watch. Other people seemed to think that if they forced me to comply with accepted gender norms I would be happier, but I hated that tutu and everything it was supposed to say about who I was.

As an adult I remember myself as being extremely bad at sports, but I think I was probably average, maybe even good – it was the sporting environment, and the gendered expectations that were placed on me, that made me feel like I was bad.

Transgender people don’t deserve to feel bad for wanting to take part in sports. Nobody deserves to feel that way – sport should be for everyone, perhaps especially for oppressed people, and everyone who wants to compete should be able to at the highest level they can.

Trans people, however, are currently at the centre of a media firestorm designed to kick them out of sports – or at least to shun them to the back of the group or to the benches. This ire is particularly aimed at trans women, who are being accused of cheating for, simply put, sometimes being quite good.

A lot of trans people are quite good at sport, and are being punished for it – take Mack Beggs, for example, who is a trans man forbidden to wrestle with other men and then mocked for beating women; or Rachel McKinnon, who recently became the first trans person to win a cycling world title and who is being cut to shreds daily on Twitter for winning.

Many trans people who compete in sport are doing pretty well, but not many are winning much. There’s this idea held by transphobic people that if we ‘allow’ trans women to compete in sport, burly cis men will start applying lipstick and steamrolling all cis sportswomen into a fine powder. Meanwhile, the poor soft trans men will be trampled into the dirt by true and proper men, or something equally pearl-clutch-inducing. In this scenario non-binary people don’t even exist, never mind the idea that they could compete in sports. What transphobes wilfully forget is that binary trans people have been competing as their true genders in the Olympics since 2003 and no trans men have been broken like the silly weak girls transphobes expect them to be, but no trans person has won an Olympic medal, either. Basically, trans people are doing about as well as cis people in sport.

I think a lot of this prejudice is because cis people forget that trans people aren’t all the same. This especially applies to trans women. Some trans women are very tall and strong and good at contact sports such as handball, like the awesome Hannah Mouncey; some trans women are small and dainty and would be awful at contact sports; people of all genders will fit those categories, too. If it’s fair for a tall and muscular cis woman to compete in sport, why not trans women of all shapes and sizes? 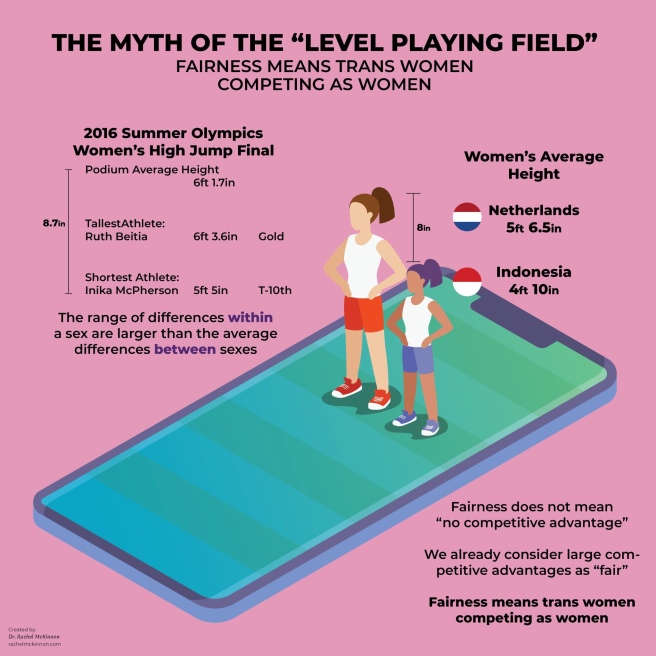 What this comes down to, if we keep following the rhetoric that ‘trans women can’t play sports because they all look like She-Hulk’, is that trans and cis women who are too tall, or too strong, or too good at what they like to do, won’t be allowed to play sports anymore. Every slightly gender non-conforming person will be at the back of the competition or made to sit on the benches, despite how good or bad they might be, and despite how they were made.

Here’s me running a charity 5k ‘bubble run’ for a local charity. I was super slow and super non-binary. I also quite liked the tutu this time.

The included infographics are by Rachel McKinnon, who is a scientist as well as a cyclist.